From East Coast to West Coast

From East Coast to West Coast 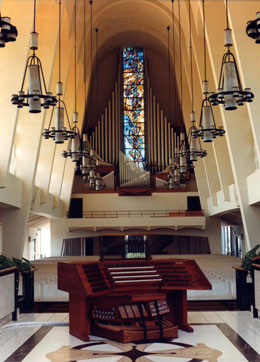 Gordon Turk has been selected to play a recital to honor renowned organ builder Lyle Blackinton. The concert will be on the Magnum Opus, the largest instrument, of the Blackinton firm; the spectacular pipe organ of the First United Methodist Church of San Diego, CA. This instrument has four manuals and 6,092 pipes including tall 32’ Principal pipes standing in the open, in the real gallery part of the organ.

The occasion for this special concert is to celebrate the 80th birthday of Mr. Blackinton who has built over 30 pipe organs in the southern California area, and it is sponsored by the San Diego Chapter of the American Guild of Organists. The concert is open to the public and there is no charge.